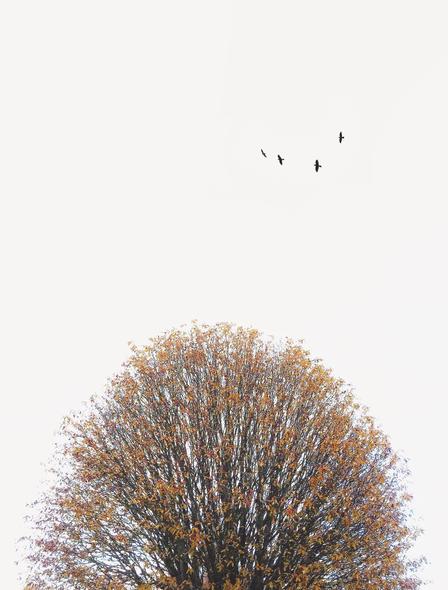 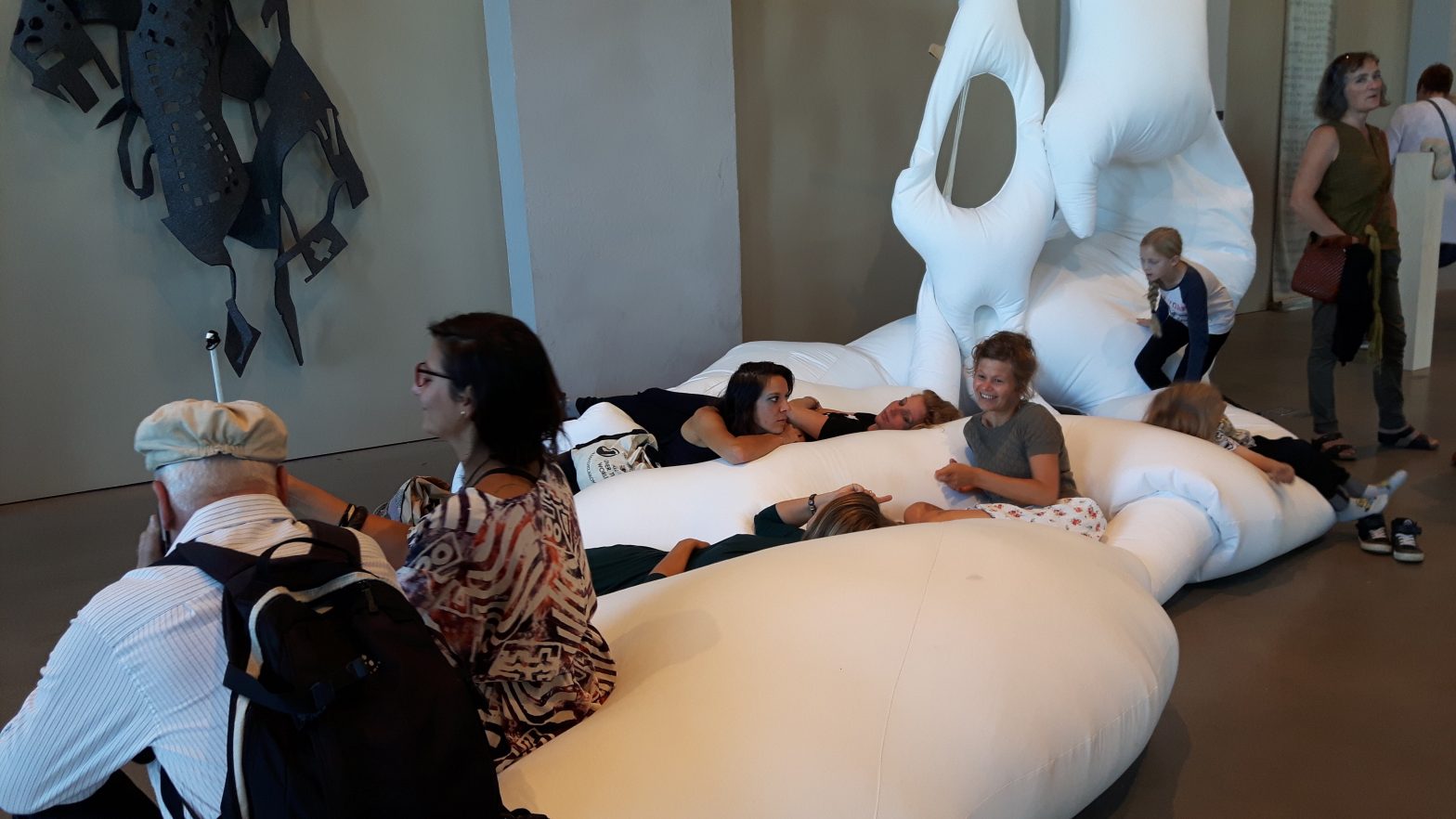 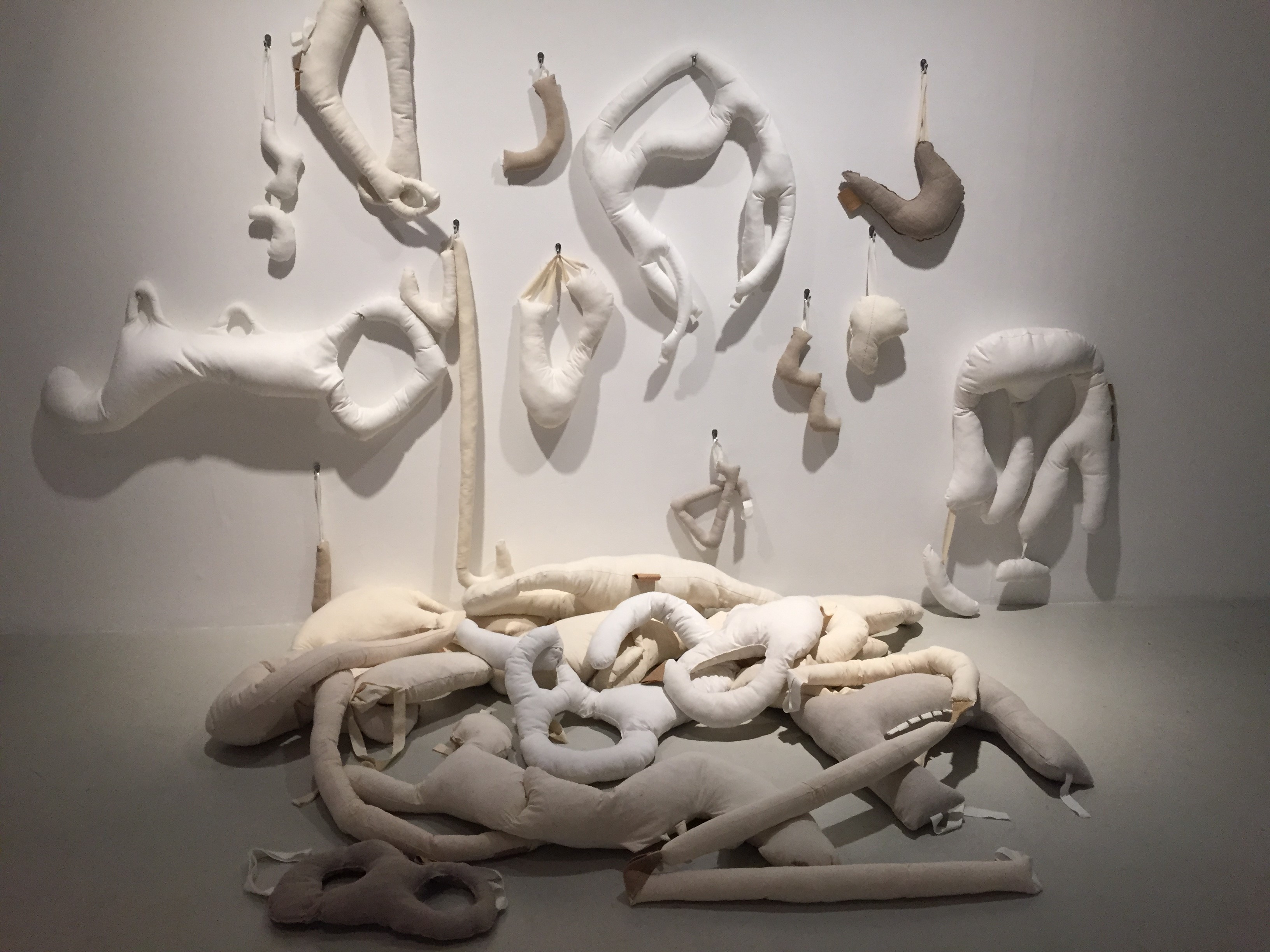 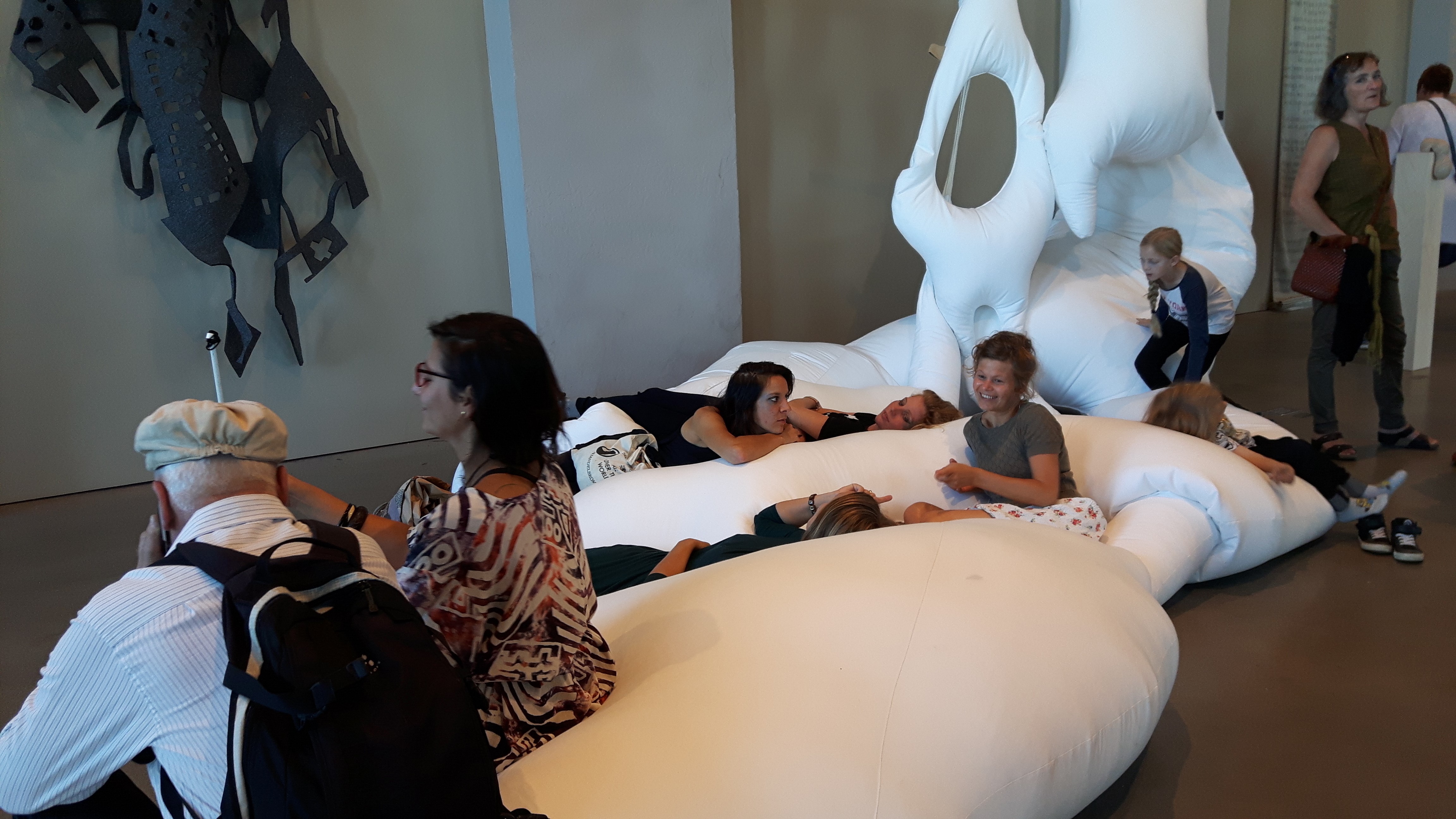 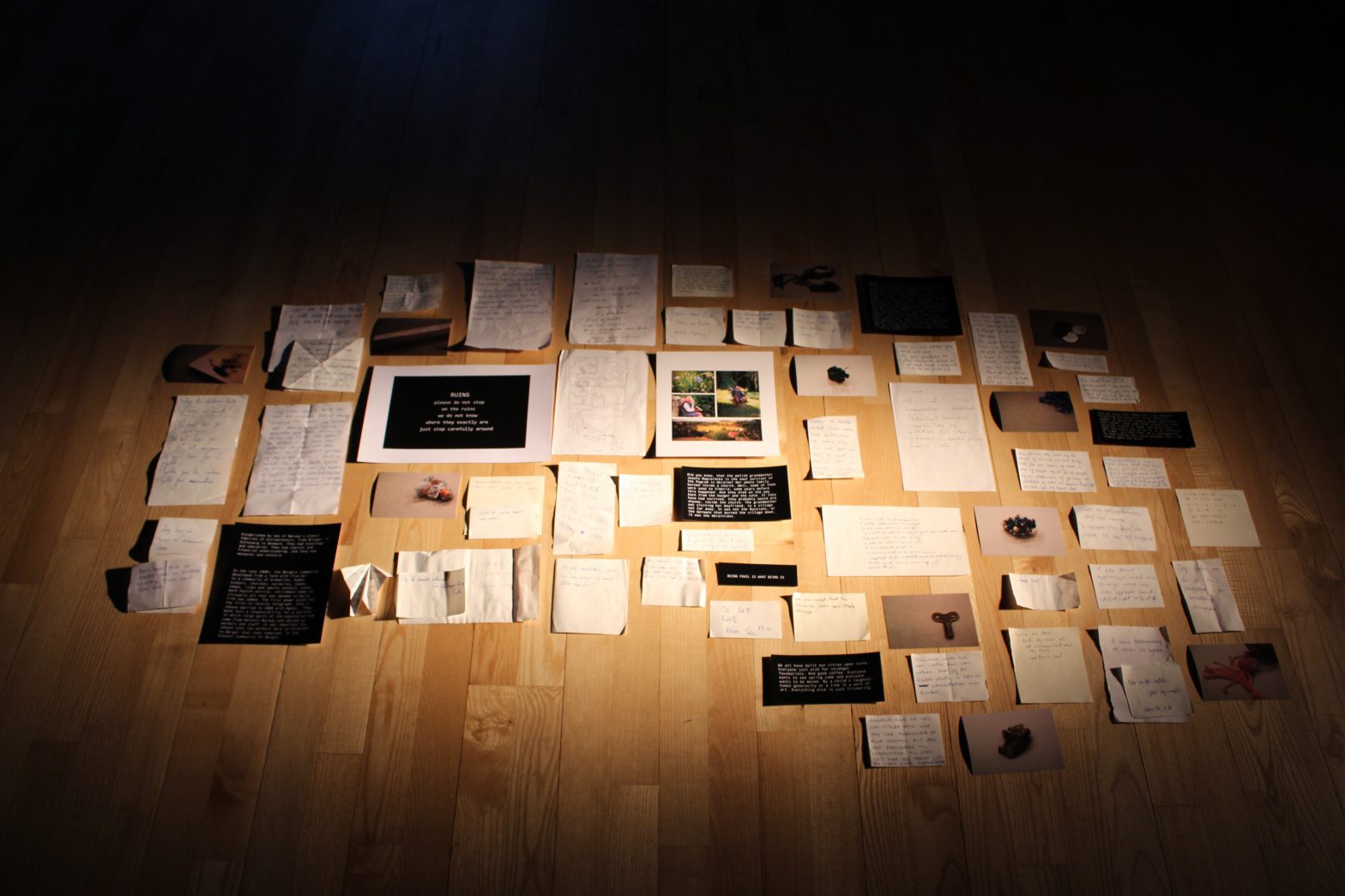 Research in 2017 Artistic Practice Program
Seachange Lab
November 2017, Aarhus, Denmark
Joanna Magierecka
The experiment departs from an idea that the audience, through interweaving of different and diverging fragments, through forming their own personal performance dramaturgy and hence experience, and by sharing their stories and experiences, will create an understanding of others as well as their experience. In that lies a possibility for shared Story, a collective Story, crossing borders, heritage, History and personal experience. Using some of the elements from the installation Ruins (Fossekleiva kultursenter, Summer 2017) I want to research how to facilitate this interweaving process, through researching interactive strategies within the installation.
During the series of experiments, it became clear that the performer was the easiest way to create connections between the content and the audience, but problematic in its nature. Given enough time, creating a space containing micro universes, and presenting different strategies for investigating and sharing actually had the same impact as the performer.
Framing the Experiment
Through continuous communication with the project manager, facilitator and dramaturg – Kathrine Lund (Teater Seachange) previous to RAPP, I had created the following structure for the research:

The specific question we had asked ourselves was “how can we engage participants to share/share more/share in different ways through the installation?”
After each session with an audience during Wednesdays experiments, we had a discussion with the participants. All of the experiments were filmed, and we both facilitated and took notes of the discussions. By “we” I mean me, Maja Ravn – master candidate from the Department of Dramaturgy, Aarhus University and Sandro Masai, performance artist and designer. The comments from Wednesday were applied for Saturday´s open session.
On Friday, we had an additional discussion with two experts – Jacob Knudsen, researcher (creative communities and digital learning) and Alejandra Zaragoza Scherman, senior researcher at Psychology Institute, Aarhus University. Jacob introduced us to the term of micro universe – a space within the space, were the audience could retreat from the installation, remaining at the same time within its frame, and contributing through the interactive strategies.
The Installation
For the purpose of the experiment, I chose only some of the elements from the installation Ruins. I also created some new platforms to share through:

A deconstruction of my grandmother’s aprons, along a chair and a recording of a conversation with my grandmother about the tragic death of her family members.
A collection of notes written by the audience visiting the installation at Fossekleiva, and texts produced by me for the same purpose.

The memory book – a book of compartments, hiding places and different ways to write on and share in. On the book´s cover, an instruction was included, and inside questions so that the audience could respond. The questions was as follows:
Who was your grandmother?
Why do children have to run so much?
What is your most important heritage?
What makes you free?
A memory box. The instruction inside explained that the audience could take one of the objects hidden within the box with them if they left something in exchange. They could take a picture of one of the objects with them. This was created for the purpose of the experiment.

The installation was open for two hours, approximately 25 participants entered the room, 1/3 left almost immediately, the rest stayed for a period of 10 to 90 minutes. Some of them were personal friends, their response to the questionnaire was though of importance, this part of the audience was reflective and wished to provide honest feedback for further investigation. 1/3 of the participants that stayed in the room longer than 10 minutes were “real” audience, not known to us personally. Some of them did interact shortly with me as well.
From the questionnaire, studied only for the purpose of the conference (Monday, November 27th), hence only shortly, and from our considerations during the performance, we came to a conclusion, and an answer to our question. This is a preliminary rapport, and further investigation is necessary, where other parameters are taken to consideration, as for example cross contamination through facilitator, group dynamics, social setting of the occurrence and the conversation between the participants. Nonetheless, the following points were common for all four experiments, and can be concluded as applicable with some certainty:

With these parameters in consideration, the audience will most likely share some of their personal stories, on a deeper level, participate and hence become a part of the installation similarly to what I am searching for as an artist. At the same time, this knowledge can be useful in other situations, outside the art space, where participation and especially sharing one’s thoughts is of great importance. As written, the performer/guide is extremely important, through the connection build on the base of creating relation with the audience, but also problematic. The arrangement of the room, ways to engage the participants will here help with creating conditions were memories, important information and thoughts can be extracted. I would like in the near future to thoroughly analyze the data (all of the experiments and the discussions were filmed) and write an academic paper on the matter, as well as the usefulness of the knowledge gathered through the experiments and the possibility of applying it in other fields. For that purpose, I have already made the necessary arrangements with the experts and co-facilitators connected to our project and hope to collaborate with them. 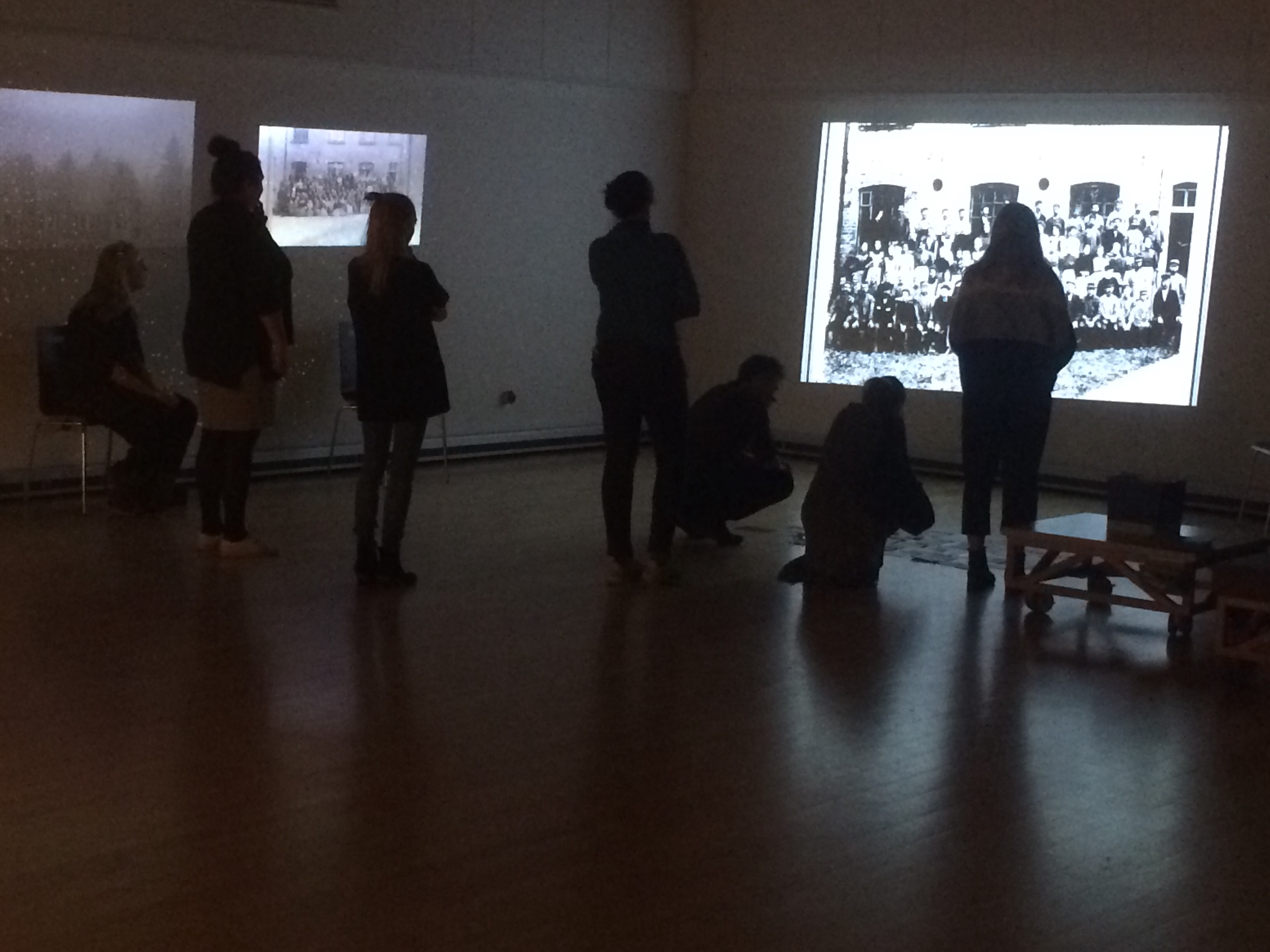 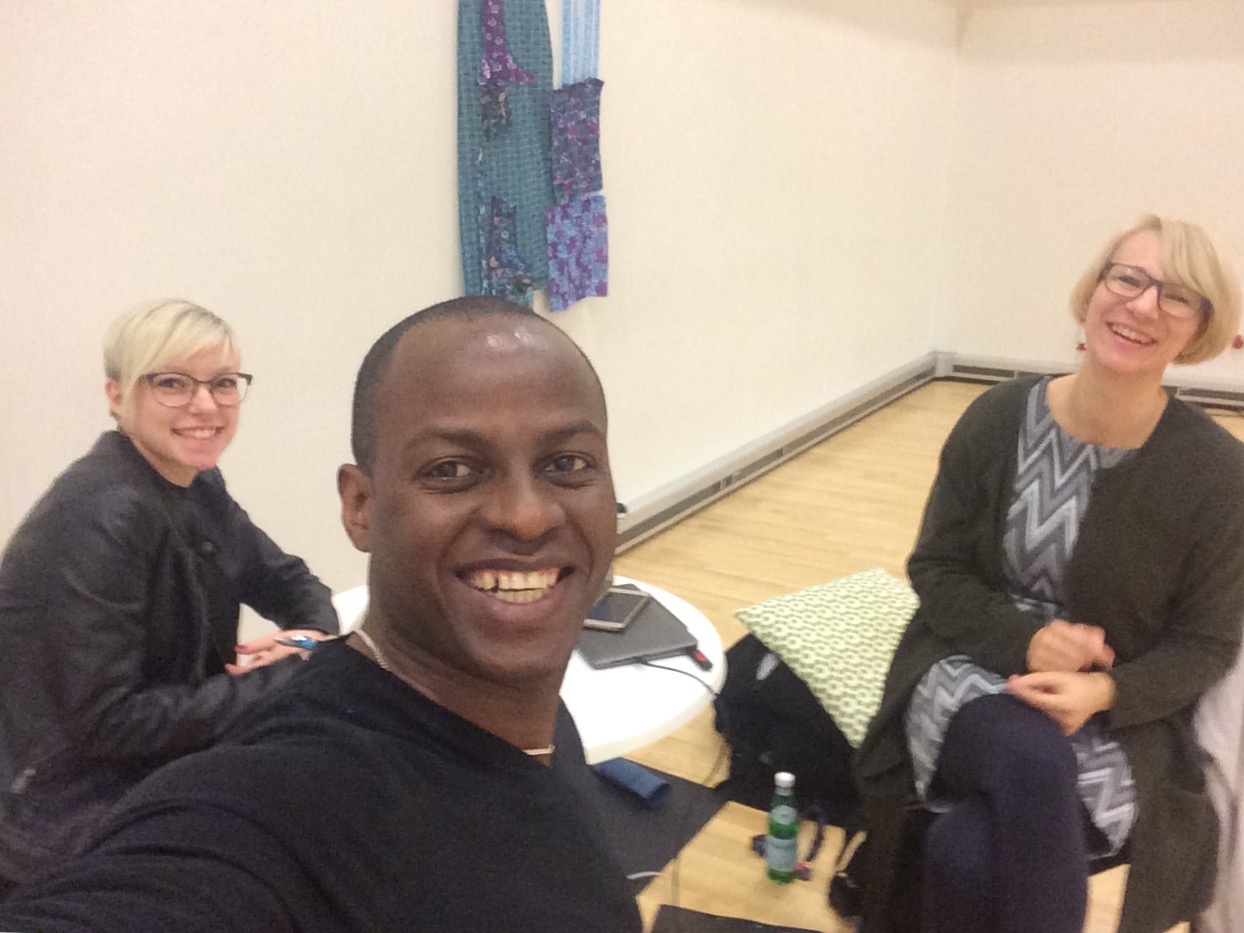 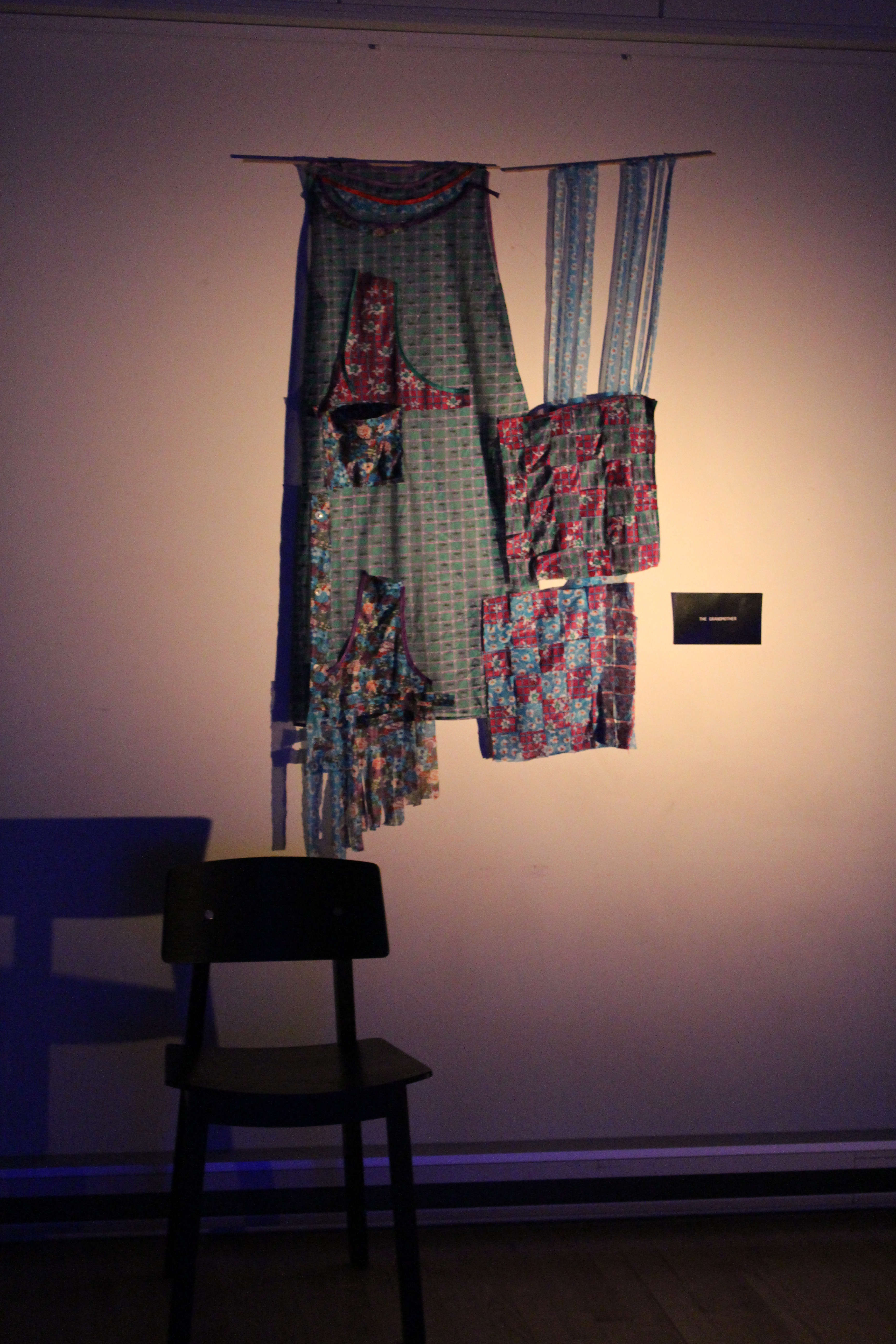 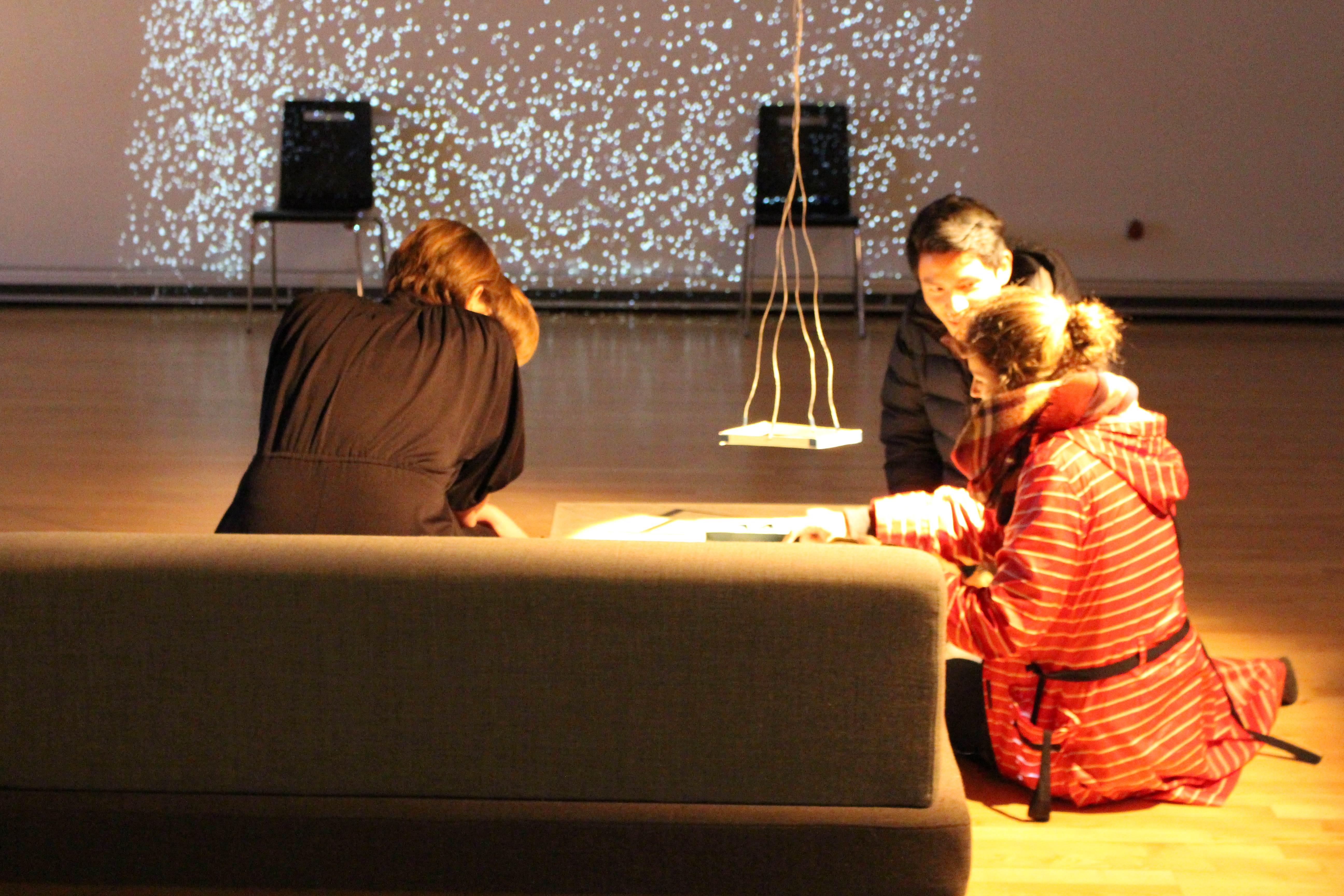 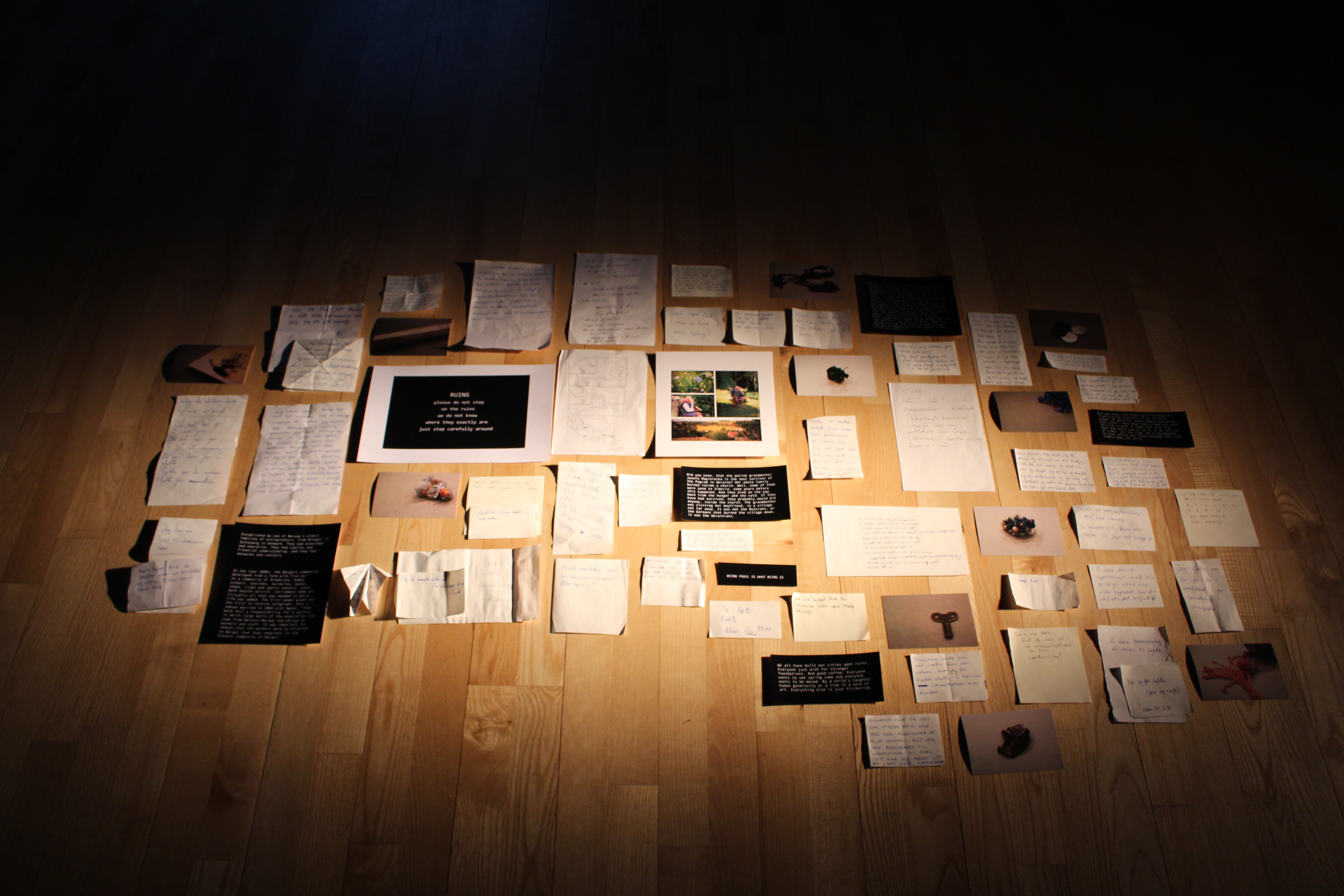